Kwasi Kwarteng has sought to shrug off the chaos that triggered his astonishing U-turn on income tax cuts for the highest earners as a “little turbulence” as he battled to regain authority.

The Chancellor remarked it had been a “tough” day as he told Conservative members in his set-piece conference speech on Monday to “focus on the task in hand”.

Downing Street was forced to reassure that Liz Truss still backs Mr Kwarteng after they abandoned their plan to scrap the 45% rate for earnings over £150,000 to stave off a Tory revolt.

The U-turn, coming a little over a week after the tax cut was announced in the mini-budget and just a month into Ms Truss’s premiership, was a massive blow to their authority.

With the Prime Minister in the audience, Mr Kwarteng told the Birmingham conference: “What a day. It has been tough but we need to focus on the job in hand.

“We need to move forward, no more distractions, we have a plan and we need to get on and deliver it.”

Making light of the chaos in a 20-minute speech containing no new policies, he said to muted laughter from party members: “I can be frank. I know the plan put forward only 10 days ago has caused a little turbulence.

“I get it. I get it. We are listening and have listened, and now I want to focus on delivering the major parts of our growth package.”

In a bid to reassure markets after the U-turn, the Chancellor is set to publish his medium-term fiscal plan, alongside official forecasts from the Office for Budget Responsibility, later this month.

Mr Kwarteng had previously insisted he would wait until November 23.

However, in his speech, the Tory frontbencher did say he would publish details “shortly” on how he planned to bring down public debt as a percentage of GDP over the medium term.

Mr Kwarteng went on to discuss what he called the “hullabaloo” and the “market reactions and the excitement” that followed his mini-budget, while giving a brief speech at a drinks reception for the PolicyExchange think tank.

Opposition MPs accused the Chancellor of “laughing” at the chaos, with Labour warning of a “huge economic body blow to working people that will mean higher prices and soaring mortgages”.

Despite £65 billion of Bank of England action to stave off fresh financial turmoil and the pound having plummeted over his mini-budget on September 23, Mr Kwarteng insisted the Tories will be “serious custodians of the public finances”.

And he insisted the Conservatives will “always be on the side of those who need help the most” despite tax policies immediately favouring the rich more than the rest of society.

Hours earlier, in announcing the U-turn, the Chancellor acknowledged that the Government’s desire to borrow billions to axe the top income tax rate had become a “terrible distraction”.

Mr Kwarteng said he had “not at all” considered resigning.

Business Secretary Jacob Rees-Mogg, a day after defending the policy, also stood by Mr Kwarteng, saying “of course he shouldn’t resign” and insisting it was not a “handbrake turn”.

“It was a political reality. Sometimes things we want to do don’t receive the approbation of the nation that you would hope for,” he told a Telegraph event at the conference.

“There is no point in sticking with them stubbornly if there simply isn’t the desire and appetite to do them. We live in a democracy and politicians have to be responsive to the democratic will.”

Mr Rees-Mogg said the climbdown was a “sound and fury that signifies nothing”, arguing it was the tax cut that would have lost the Treasury the least amount of money.

Paul Johnson, the director of the Institute for Fiscal Studies think tank, said the reversal of the policy that would have cost £2 billion a year was only a “rounding error in the context of public finances”.

With around £43 billion of unfunded tax cuts remaining, Mr Johnson warned: “The Chancellor still has a lot of work to do if he is to display a credible commitment to fiscal sustainability.

“Unless he also U-turns on some of his other, much larger tax announcements, he will have no option but to consider cuts to public spending: to social security, investment projects, or public services.”

The chances of a Commons revolt diminished, with former Cabinet minister Michael Gove suggesting he could now support the package and fellow potential rebel Grant Shapps welcoming the U-turn.

The Chancellor declined to directly apologise to the nation for the financial turmoil and rising mortgage rates and to Tory MPs who had been warned they could be kicked out of the parliamentary party for voting against the tax plans.

Instead he told BBC Radio 4’s Today programme: “There’s humility and contrition and I’m happy to own it.”

Shadow chancellor Rachel Reeves called for them to reverse “their whole economic, discredited trickle-down strategy” as she said the U-turn had come “too late for the families who will pay higher mortgages and higher prices for years to come”.

The pound surged higher in overnight trading on Monday as reports emerged that the Government was preparing to U-turn.

Sterling hit 1.12 US dollars, recovering to levels seen before the mini-budget.

The Chancellor and Ms Truss had been doubling down on their plans despite the financial turmoil triggered by the package, with the Prime Minister defending the tax cut as recently as Sunday.

They had even resisted backing down in the face of criticism from the International Monetary Fund and the Bank’s emergency intervention to restore order.

Mr Kwarteng had been preparing to tell the conference that they must “stay the course” and back their tax plans but the words were stripped from his final speech.

Ms Reeves said: “This speech showed us a Chancellor and a Tory Government completely out of touch, with no understanding on its own appalling record on growth.

“What the Chancellor called a little financial disturbance is a huge economic body blow to working people that will mean higher prices and soaring mortgages. That’s the Tory economic premium.”

“Laughing about the turbulence caused by this botched budget is an insult to the millions of people already facing spiralling mortgage costs,” she said.

“This should be his first and last conference speech as Chancellor.” 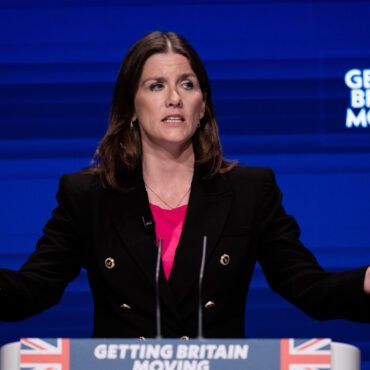