A P&O Ferries vessel is to remain detained after “additional deficiencies” were found during a reinspection.

A P&O Ferries vessel is to remain detained after “additional deficiencies” were found during a reinspection.

The Maritime and Coastguard Agency (MCA) said there were issues with safety systems and crew documentation for the Pride of Kent, which has now been detained for more than a fortnight.

P&O Ferries suspended most of its operations when it replaced nearly 800 seafarers with cheaper agency workers on March 17.

The MCA said it had advised P&O to invite the agency back when the issues with Pride of Kent, which was detained on March 28, have been addressed.

An MCA spokesperson said on Wednesday evening: “The Pride of Kent will remain detained following the reinspection of the ferry today which found a number of additional deficiencies including in safety systems and crew documentation.

“We have advised P&O to invite us back once they have addressed the issues. We do not know yet when this will be.”

Another vessel, Spirit of Britain, was detained on Tuesday after an inspection found “a number of deficiencies”.

The suspension of Dover-Calais sailings by P&O Ferries means there is a shortage of capacity on the key route.

This has contributed to large queues of lorries on the roads approaching the Port of Dover.

A 23-mile coastbound stretch of the M20 is closed from junction eight (Maidstone) to junction 11 (Westenhanger) to hold thousands of lorries as part of Operation Brock.

P&O Ferries has accused the MCA of carrying out inspections with “an unprecedented level of rigour”.

In response, the agency said it works “in exactly the same robust way” for every ship.

It previously cleared P&O Ferries’ Pride of Hull and European Causeway vessels, which are operating on the Hull-Rotterdam and Larne-Cairnryan routes respectively. 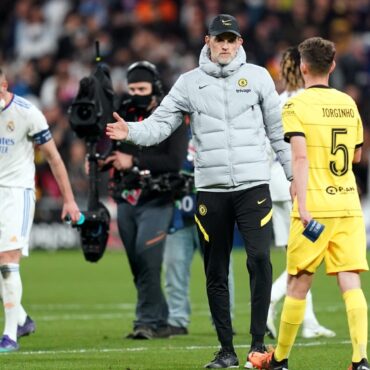 Thomas Tuchel risked the wrath of UEFA by claiming referees lack the “courage” to give big decisions against Real Madrid. Chelsea boss Tuchel even admitted he could expect repercussions for criticising Polish referee Szymon Marciniak in the wake of the Blues’ 5-4 Champions League quarter-final exit. Chelsea toppled Madrid 3-2 at the Bernabeu Stadium in their last-eight second-leg but exited the tournament on aggregate and only after extra time in […]