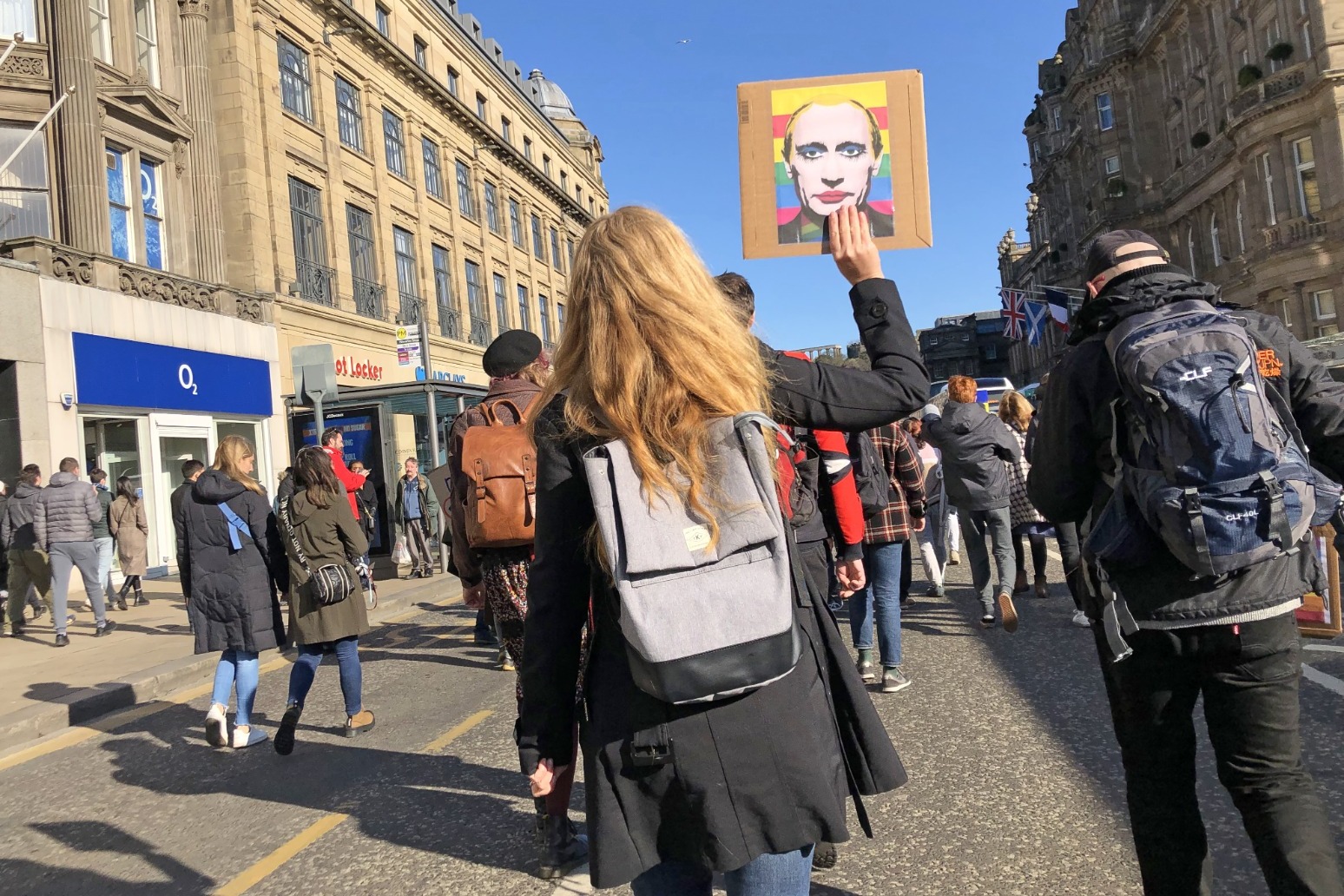 Campaigners supporting Ukraine continue to be defiant in Edinburgh as thousands marched through the capital’s streets to condemn Russia’s ongoing military invasion of Ukraine.

Campaigners supporting Ukraine continue to be defiant in Edinburgh as thousands marched through the capital’s streets to condemn Russia’s ongoing military invasion of Ukraine.

Sounds of beating drums and bells rang out through the city as demonstrators headed from the Russian consulate to the Scottish Parliament building chanting “Putin murderer” and “hands off Ukraine” on Sunday.

Main roads, including Princes Street, were blocked as campaigners carrying placards with messages such as Free Ukraine and No War encouraged people watching from the sidelines to join them in their clear opposition to the invasion.

Since Russian troops descended on Ukraine early on Thursday, Scotland has seen a number of protests against the military action of President Vladimir Putin’s Russian regime.

Slava Yevminova, from Ukraine, attended the demonstration despite having not slept properly for three days, lying in wait for messages from friends and relatives as her home country is blighted by shelling and gunfire.

The 41-year-old, who runs her own business in Edinburgh, said her home city of Kharkiv has become “hell” since war broke out.

“Kharkiv is today hell on earth,” the 41-year-old said, fighting back tears.

“It’s not the beautiful city I remember and that I was born in.

“Some of my friends are hiding in cellars, some are trying to flee the city and some they have taken arms in their hands and they are protecting their home.”

Speaking about the demonstration, Ms Yevminova said: “I am really grateful for all the support.

“I have taken videos and pictures that I will send back to Ukraine who are now fighting Russian aggression.

The demonstration started with speeches from fellow Ukrainians and people from Scotland to Lithuania to Kazakhstan to show they stand in solidarity with the war-stricken country.

Others shared personal stories about their families taking up arms or fleeing Ukraine for safety.

Artem Golozubtsev, a Ukrainian citizen born in Russia and who now runs a personal fitness business in Edinburgh, said he has friends in the grips of the conflict.

“Last time I spoke to one of my friends it was three hours ago and he said, ‘I can’t speak to you, I can hear the bomb exploding’.”

Because of his heritage, Mr Golozubtsev has relatives and friends in both Russia and Ukraine.

Having a toe in both countries, he voiced his opinions on the ongoing war.

“I do have friends, some of them work for the government in Ukraine, they still have to work, and seek shelter at night in subway stations,” he said.

“On the other side I have other relatives staying in Russia, some of them military, and the words coming from their side is ‘we are trying to free Ukraine from the Nazis, from the government that was not elected by the Ukrainian people’.

“We have not invaded anyone, and we don’t want to invade Russia.

“The reason why we keep asking for help for armour from Nato and the UK is because we want to defend ourselves.

“Our rockets are not going that way, it’s the opposite that’s happening.”

He called on his fellow Russian friends and relatives to take to the streets in the country where he was born to protest the war.

Edinburgh West MP Christine Jardine was among those taking part in the protest in the Scottish capital, which is twinned with Ukraine’s capital Kyiv, where some of the fiercest attacks have been so far.

Ms Jardine said: “All over Europe people are sending the clearest of messages to the Russian government, to Putin, to say this is not acceptable.

Demonstrations against the war also took place in other cities across the UK and in Europe. 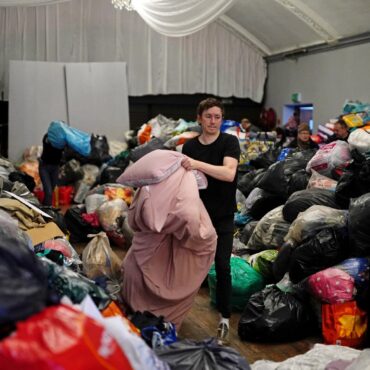 Donations made to Ukraine humanitarian efforts as refugee numbers increase